My article at the Capgemini's Intranet site 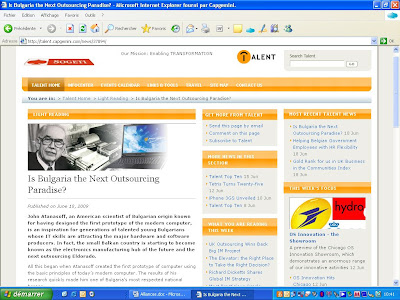 Thanks to Kate ans Andrea.
Is Bulgaria the Next Outsourcing Paradise?
Published on June 18, 2009

John Atanasoff, an American scientist of Bulgarian origin known for having designed the first prototype of the modern computer, is an inspiration for generations of talented young Bulgarians whose IT skills are attracting the major hardware and software producers. In fact, the small Balkan country is starting to become known as the electronics manufacturing hub of the future and the next outsourcing Eldorado.
All this began when Atanasoff created the first prototype of computer using the basic principles of today’s modern computer. The results of his research quickly made him one of Bulgaria’s most respected national heroes.
First computer prototype 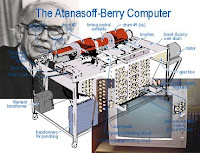 In the late 1930s, he worked on developing methods to facilitate the process of calculating solutions to the extended systems of linear algebraic equations and was convinced that the digital approach offered considerable advantages over the slower and less accurate analogical one. The first computer’s prototype included four significant and entirely novel operating principles in its operation: the binary system, regenerative data storage, logic circuits as elements of a program, and electronic elements as data carrying media.
Hot inventions in the Cold War
Bulgarian informatics where founded during the Cold War. The first Bulgarian computer was created in 1979 as the first of three generations of computers of 8, 16 and 32 bits. It was launched under the label ‘Prvetz’, after the village of origin of the head of the communist government, Todor Zivkov. At the same time, a number of Bulgarian scientists left the country for the United States and Western European Countries. Peter Petroff, for instance, became a key figure in the NASA space program and in 1972 invented the first digital watch, the Pulsar.
Collaboration with the high-level Russian scientists very much contributed to the development of Bulgarian computer science during this period, and 1979 saw the first Bulgarian in space. Since then, Bulgaria has developed over 100 devices and instruments used in space research and the country has become the third global producer of astronauts’ food.

Modern success
In the 1980s, Bulgaria produced 40 percent of computers within COMECOM (Council for Mutual Economic Assistance within the Soviet Block) for US$ 13.3 billions per year.
Today, inspired by their spiritual ‘father’ John Atanasoff, millions of young Bulgarians dream of becoming famous thanks to their computer skills. And indeed, following the 1989 change in the political regime and the harsh economic crisis that hit the country for a decade after that, young Bulgiarians’ qualifications and relatively ‘low-cost’ contributions are extremely sought after by the largest software and hardware producers in the world. These are even opening sites in Bulgaria:
Hewlett-Packard opened its global delivery service center in the capital Sofia in 2006, and now employers 5000 people.
IBM’s delivery center in Sofia was opened in 2008 as part of the Business Transformation Outsourcing (BTO) activity of the group.
HP and IBM have call centers in Bulgaria, and Microsoft consider Sofia as one of their top support centers in the world.
Ubisoft opened a studio in Sofia (2006) drawing on an "exciting talent pool" of technical professionals in the area, according to Christine Burgess-Quémard, executive director for the computer games producer. The studio has been charged with creating the PC version of Michel Ancel’s Rayman "Raving Rabbits" and console versions of "Crime Scene Investigation: 3 Degrees of Murder", "Prince of Persia" for PlayStation and "Chessmaster" for Xbox.


Many thanks to our "resident Bulgarian in Paris" Daniela Dalbokova for sending this article to Talent.

Kaka said…
While people may have different views still good things should always be appreciated. Yours is a nice blog. Liked it!!!
7 August 2009 at 04:44

Dissertation said…
Blogs are so informative where we get lots of information on any topic. Nice job keep it up!!

Unknown said…
Wonderful article, thanks for putting this together! "This is obviously one great post. Thanks for the valuable information and insights you have so provided here. Keep it up!"
Dissertation Help | Custom Dissertation
19 June 2010 at 02:26

Business as unusual Forget the recession: the societal changes that will dominate 2010 were set in motion way before we temporarily stared into the abyss. As always, the future is unevenly distributed: one only needs to look at the Googles and the Amazons and the Zappos and the Virgins of this world to get a feel for 'business as unusual'. So not surprisingly, the trends in this briefing all touch on doing things differently, driven by changing consumer preferences and desires. Time to study and learn from those brands that you think are already mirroring today's more diverse, chaotic, networked society, and then outdo them ;-)  URBANY       A forever-growing number of more sophisticated, more demanding, but also more try-out-prone, super-wired urban consumers are snapping up more ‘daring’ goods, services, experiences, campaigns and conversations. Urban culture is the culture. Extreme urbanization, in 2010, 2011, 2012 and far beyond will lead to more sophisticated and